Loggers experience the long and short of it

Dawson DuMont's fly ball to centerfielder Tripp Zhang for the third out top of third inning to retire the sides in the first of a doubleheader Saturday. Marinters over Loggers 7-6 in eight innings.

Third baseman Cy Williams snags a foul ball off the bat of Cole Wadsworth on the 2-1 pitch for the second out top of the third in the second game of a doubleheader Saturday. Loggers fall to Mariiners 18-0 in five innings.

The dugout empties to greet Landon Haddock as he crosses the plate for a homerun on the 1-0 pitch to put the Loggers up 3-2 in the bottom of the sixth.

Last Saturday, April 30 was a big day for baseball in Libby — the annual Little League parade, followed by opening day.

It was opening day for the Libby Logger Legion baseball team. Under dark skies the lights at the Lumberyard were turned on early as the Loggers prepared to host the Mission Valley Mariners in doubleheader action.

The Mariners would play in another eight-inning affair.

In the first game Logger starting pitcher Caden Williams kept the Mariners in check long enough for the Logger bats to celebrate the day.

Held scoreless and trailing 2-0 after five innings, the Loggers would take a 3-2 lead heading into the seventh inning.

The Mariners would retake the lead at 6-3.

No problem. Tied up at six, the game would go extra innings where the Mariners would take a 7-6 eight-inning victory over the Loggers.

The second game? Well, it can happen to the best of ‘em. In a contest shortened to five innings, the 10-run rule went into effect as the Mariners cruised to a 18-0 victory over the Loggers.

Game one saw Libby starting pitcher Caden Williams get into some early trouble. Two walks, a wild pitch and a single would load the bases. A one out single would bring in the Mariner’s first run.

The bases still loaded, Williams would get the next Mariner batter to squib the ball a few feet from the plate. Catcher Rusty Gillespie pounced on the ball and stepped on the plate. Then fired to first to complete the double play.

Williams would pitch five strong innings, striking out two, while giving up three walks. He gave up four hits in allowing two runs — both earned.

At the close of the first inning the score was Mission Valley 1, Libby 0. The Loggers would not score until the sixth inning.

The Mariners would respond with David Bailey now on the mound. An error, a walk and a single would load the bases.

The Loggers would send Williamson to the mound. A Logger throwing error brought in two Mariner runs. The Mariners would score two more runs and take a 6-3 lead over the Loggers.

With John Rambo’s “It’s never over” attitude, the Loggers would load the bases. With two out Cy Williams slapped a single to center. The ball would eventually roll to the wall, clearing the bases.

The Mariners would score one run in their half of the eighth. A sacrifice fly would bring in a runner from third and the Mariners led 7-6. After a walk to open their end of the eighth, a strikeout, flyout and groundout, and it was over.

Leading 2-0 after one inning, the Mariners got busy. Four inning and 16 runs later the game was called. Mariners 18, Loggers 0.

The Loggers used four pitchers during the shortened game.

Entering this season, Coach Kelly Morford said that pitching and filling out a rotation would be a concern for the Loggers.

The Loggers travel to Whitefish for their next game. They will take on the Glacier Twins this Wednesday, May 4.

The dugout empties to greet Landon Haddock as he crosses the plate for a homerun on the 1-0 pitch to put the Loggers up 3-2 in the bottom of the sixth. 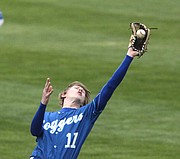 Third baseman Cy Williams snags a foul ball off the bat of Cole Wadsworth on the 2-1 pitch for the second out top of the third in the second game of a doubleheader Saturday. Loggers fall to Mariiners 18-0 in five innings.