The dugout empties to congratulate Caden Williams after his 2-run homer in the bottom of second inning vs. Northern Lakes Saturday afternoon. The Loggers won 11-1 in five innings over the Mountaineers. (Paul Sievers/The Western News)

The dugout looks on as the 2-0 pitch is delivered to Landon Haddock against Claremont Thursday evening in the Big Bucks Tournament at Lee Gehring Field. (Paul Sievers/The Western News)

Claremont's Adrian Sanchez flies out to shortstop Aiden Rose for the third out top of second inning. The Loggers fell to the Cardinals 9-2 in the second game of the Big Bucks tournament Thursday evening. (Paul Sievers/The Western News)

Not even an accidental attempt at a jinx in the press box was going to keep Libby Loggers first baseman Caden Williams from hitting for the cycle.

Saturday afternoon at Lee Gehring Field, Williams was 4-for-4 while scoring three times and driving in four runs to help lead the Loggers to an 11-1 win in five innings over Northern Lakes at the Big Bucks Tournament.

After Williams collected a triple in the fourth inning, a comment was made about him hitting for the cycle - home run, triple, double and single in the same game. That prompted another to remark that even speaking of it was sure to put a jinx on his effort to do it.

Williams, who obviously didn’t know about the conversation, finished off one of baseball’s rare occurrences with a double in the fifth.

Williams' cycle was one of many highlights for the Loggers as they finished 3-1 and claimed fifth place in the tournament.

In the Logger’s first game, they fell 9-2 to the Claremont Cardinals. But they triumphed in their next three games, beating Latah, Idaho, 6-4, and the Northern Lakes Mountaineers, 11-1, on Saturday and 15-7 on Sunday.

Despite a 2-1 record through Saturday’s action, the Loggers were one run short of reaching Saturday night’s semifinals.

Libby shared a 2-1 mark with Claremont, Latah and Bitterroot, but lost the tiebreaker to the Cardinals on the head-to-head result. The next tiebreaker was total runs allowed. Latah had surrendered 11 runs while Bitterroot, a team Libby didn’t play, had allowed 13. Libby allowed 14.

But not reaching the semifinals wasn’t going to let Morford forget the many positives that occurred in the tournament.

"This tournament is normally a turning point for our season," Morford said. "We played three good games and the most important thing is to be playing our best ball at the end of the season. These guys are certainly capable of putting it together."

In Saturday's win over Northern Lakes, Williams staked the Loggers to a 1-0 lead with a RBI single to score Tripp Zhang. In the second, his 2-run home run over the fence in right-center really electrified the crowd as the Loggers took a 4-0 lead.

Williams was part of a quartet of Loggers, hitting Nos. 1-4, who combined to collect 10 hits in 14 at-bats. They scored nine runs and knocked in 10.

Cleanup hitter Landon Haddock put down a perfect sacrifice bunt in the first inning before smashing a 2-run homer in the fourth and adding a run-scoring single in the fifth to complete the 10-run win.

Winning pitcher Aydan Williamson was 2-for-4 with a double and two RBI. Williamson threw well for the Loggers Saturday, striking out six. He didn’t walk a batter and hit one.

Zhang was 2-for-4 with a double. He scored three times and drove in one run. He also made a great running catch of a well-hit ball in the second inning.

For Williams, he also pitched well Friday night as the Loggers scored a 6-4 win over Latah, Idaho. He allowed just one unearned run in five innings while striking out 10.

Morford credited hitters in the lower part of the lineup for coming up with big contributions against Latah. Rusty Gillespie had a run-scoring hit and scored once. Chase Rayome also knocked in a run with a hit and Caleb Moeller had a hit and scored one run. Rayome entered the game after Dylan Buckner was injured.

Morford also spoke about the trip to Omaha, Nebraska, for the College World Series.

“It was a great experience,” Morford said. “The bus ran well, that’s something you hope goes well,” he said with a laugh.

The Loggers, who played a number of games on their way to the CWS and on the return trip, watched Oklahoma, Texas A&M, Notre Dame, Texas, Arkansas and Stanford. The Sooners ended up as national runnersup after falling to Ole Miss.

“Just for the kids to see that level of baseball was great,” Morford said.

The group also stopped in Colorado to take in a Padres-Rockies game.

The Loggers return to action Tuesday as Glacier comes to town for a 5 p.m. game. Thursday, the Loggers host Eureka at 5:30 p.m.

Claremont won the tournament. The Cardinals lost to the Mission Valley Mariners, 8-4, Saturday morning. But they won the game that mattered more on Saturday night, shutting out the Mariners, 3-0. They won the championship Sunday afternoon with a 6-3 win in eight innings over the Bitterroot Bucs. 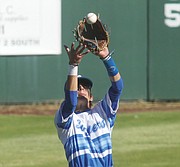 Claremont's Adrian Sanchez flies out to shortstop Aiden Rose for the third out top of second inning. The Loggers fell to the Cardinals 9-2 in the second game of the Big Bucks tournament Thursday evening. (Paul Sievers/The Western News) 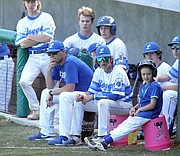 The dugout looks on as the 2-0 pitch is delivered to Landon Haddock against Claremont Thursday evening in the Big Bucks Tournament at Lee Gehring Field. (Paul Sievers/The Western News)