4-years-old Ryker Webb is described as having red hair and blue eyes. He was last seen in the Bull Lake area in Lincoln County on Friday.

The search continues for a missing 4-year-old boy in Lincoln County.

As of 6:30 p.m. Saturday, Lincoln County Sheriff Darren Short said there had been no sign of Ryker Webb.

Short said a call came in about 5 p.m. Friday that the boy was missing from a residence located on Montana Highway 56 in the Bull Lake area.

“He and his dad were in the yard, the father went inside the home for a moment and when he went back outside, the child was gone,” Short said. “We have a very distraught family and a lot of concern over him.”

Short said on Saturday evening there were no indications of foul play.

The child was described as having red hair and blue eyes and standing about 3 feet tall. It is unknown what clothing or footwear the child was last wearing.

A code red alert was sent out Friday to residents in the vicinity, asking that they search their own properties and structures. A missing person report was also disseminated nationwide.

Short said search and rescue squads from three states, including Montana, Idaho and Washington, looked for the child with K-9 units, boats, drones with infrared cameras as well as two National Guard helicopters from Helena.

“We’ve covered several miles in all directions, but the rugged terrain and brush have made it difficult,” Short said. “Two Bear Air and Life Flight helicopters would have normally searched last night with their infrared, but it wasn’t possible with the poor weather that occurred Friday night.

Thunderstorms, heavy rain and heavy mist were all factors that limited the air search. Short added that a large thunderstorm that rolled through last night may have wiped out any possible signs or traces of the child.

“I was surprised, and grateful, that the National Guard helicopters were able to get here to help,” Short said.

Search efforts are expected to resume Sunday morning. Short said if the child wasn’t found Sunday, they would reassess the situation.

Short also thanked the Halfway House Bar and Grill, Stillwater Christian Church and Rosauers Supermarkets for providing food and water for the dozens of searchers who worked to locate the child.

“I truly want to thank everyone who came out to help,” Short said. 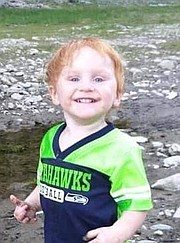 4-years-old Ryker Webb is described as having red hair and blue eyes. He was last seen in the Bull Lake area in Lincoln County on Friday.