Mineral Avenue, along with the U.S. Highway 2 corridor and California Avenue, is seen by city officials as a likely landing spot for retail marijuana outlets. (Derrick Perkins/The Western News)

Under state law, a 500 foot buffer must exist between retail marijuana outlets and schools and churches. (Derrick Perkins/The Western News)

Recreational marijuana shops must remain 500 feet from a church or school under a new state law regulating the industry. (Derrick Perkins/The Western News)

Under state law, cannabis shops already must keep 500 feet from a house of worship or school so long as they are on the same street. Early on, the three city councilors on the committee debated creating an additional 500 or 1,000 foot buffer between competing storefronts, but ultimately nixed the additional hurdle.

Recreational marijuana shops must remain 500 feet from a church or school under a new state law regulating the industry. (Derrick Perkins/The Western News)

Studying a map of the downtown and highway commercial districts, city councilors Zach McNew and Brian Zimmerman worried that the proximity requirement would prove overly onerous.

“The only thing I’m kinda [concerned about] is that 1,000 foot thing between California and Mineral,” Zimmerman said. “That could really limit it to the point you’re talking two [shops total], one on either street or two on one.”

McNew argued against making it more difficult for entrepreneurs to launch a now legal enterprise. He questioned the role of government in setting limits on types of businesses and wondered about the fairness of curtailing marijuana shops while placing no such burden on similar ventures. 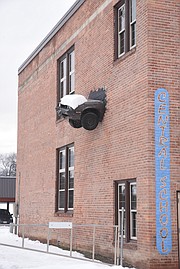 “I’m against 100 or 15 consignment stores next to each other, but those are legal businesses,” said McNew, who used roadside casinos as another example. “Why single out marijuana stores? Because we have an area that has three bars and a brewery on one block.”

Under state law, a 500 foot buffer must exist between retail marijuana outlets and schools and churches. (Derrick Perkins/The Western News)

City Councilor Kristin Smith harkened back to an earlier concern, that Libby would end up with a “green mile,” a reference to a strip of marijuana dispensaries in the Kalispell area.

For that to happen, Zimmerman said, a bunch of existing storefronts would have to open up all at once. While vacancies exist on Mineral and California avenues, he and McNew struggled to envision a sudden deluge of marijuana retailers.

“We probably are pretty safe,” he said.

Smith came around to their thinking after a moment’s deliberation. Even if Libby saw intense interest from recreational marijuana retailers, the city could only support so many shops, she said.

Mineral Avenue, along with the U.S. Highway 2 corridor and California Avenue, is seen by city officials as a likely landing spot for retail marijuana outlets. (Derrick Perkins/The Western News)

“Playing out the scenario: For some reason a bunch of places open up, so all the sudden there are a bunch of storefronts available for shops to go in — they’re not going to make it,” Smith mused.

McNew pointed out that each new shop would bring additional jobs to Libby.

As for marijuana cultivation, the trio held steady on rejecting it within city limits. Smith said she checked with state officials and determined the municipality could restrict industry locally through zoning.

She included two proposed provisions in the ordinance, one with rules for cultivation and the other eliminating it. The former required — before it was struck from the proposal — the facilities to adopt measures to prevent the odor of marijuana from wafting offsite.

Zimmerman worried that preventative measures would prove unable to keep up with the smell. Miasma aside, the trio concluded that the city lacked the space for cultivation operations.

“I don’t think there is room to cultivate in Libby,” McNew said.

“Not on any scale,” Smith agreed.

The rest of the proposed ordinance lays out how marijuana retail outlets can look and operate within the city. It expressly prohibits recreational marijuana as a home business. Those that open on Libby’s main drags must adopt facades that blend in with the surrounding neighborhood, install security systems and operate safely.

The three also approved a draft letter for Libby City Council to send to county officials. In it, the municipality asks county commissioners to put the extra 3 percent local tax on recreational marijuana sales before area voters.

The missive requests that commissioners pursue a mail-in election in the coming months. It offers to cover a portion of the cost of an election from city coffers.

As a final bit of housekeeping, committee members agreed to propose a rewording of the city’s business license ordinance. The language therein prohibits City Hall from issuing a license to an enterprise deemed illegal under federal law. Smith had checked with the city attorney late last year and learned that the municipal would be on tenuous ground trying to deny a license to a marijuana retailer on that basis.

Regardless, she did not foresee any federal penalties for following state law rather than federal.

“I don’t think we need to be worried about the feds,” Smith said.

“I think they would go to Denver before they came to us,” McNew agreed.

Smith tentatively planned to present both the letter and the draft ordinance to the full city council at its Feb. 7 meeting.