Lori was born May 17, 1935, to Lorenz and Margaret Gustin in Hettinger, N.D. The middle of seven children, she attended Hettinger Public Schools, graduating in 1953. She then enrolled in the Presentation School of Nursing at Northern State College in Aberdeen, S.D., graduating as a registered nurse. She worked in many interesting nursing fields, including at Mount Sinai Hospital in Minneapolis, Minn., and the VA Clinic in Miles City. 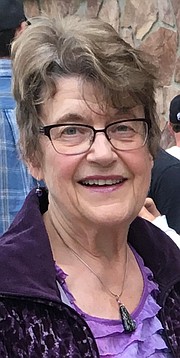 In 1958, Lori married Chuck Thorstenson, a science teacher and football and wrestling coach in Hettinger. Lori worked at the Hettinger General Hospital and the couple was blessed with three sons: Rod, Steve and Tad. In 1966, they moved to Libby to pursue their professions. Lori resumed nursing and Chuck worked as a high school teacher and coach. In 1969, their fourth son, David, was born. As busy as she was, she then spent an enjoyable stint of time working at Center Drug and Glacier Bank.

Chuck passed away unexpectedly in 1984 and in 1987 Lori returned to nursing in Bismarck, N.D. In Bismarck, Lori was employed at the University of Mary, Q&R Clinic and Home Medical Resources until she retired in 1995. Lori headed back to Libby to enjoy her retirement.

Above all, Lori loved life and took advantage of its golden opportunities. She was a devout Catholic and attended church weekly her entire life; it was not uncommon to see her beside her good friend, Jean Buhl, at St. Joseph Parish. She loved to play cards and gathered several times a week with all of the special friends she had met over the years.

She loved mountain drives and drinking a beer around an open fire, often talking about growing up on her family’s farm in North Dakota. She treasured her time at the Long Branch cabin on Upper Thompson Lake and always exclaimed, “I just love it out here!”

Lori was a Libby Logger mom and fan, traveling throughout Montana for 46 years. She could be found cheering on the Logger and Logger Greenchain teams with her close friends, the Lundstroms and the Grahams. She knocked out many miles walking with her friend, Pat; for years they could be seen strolling Libby’s back roads. She often reflected on the good times traveling with friends and family to Mexico, Ireland and across the U.S.

Huck stayed forever close to her siblings and the Gustin family nieces and nephews, cherishing their time together. She was thrilled about her grandchildren and took great advantage of spending quality time with them. Life was to be lived and laughter was always welcomed in Lori’s life. She was a caring mother, grandmother, sister, aunt and loyal friend to many and a truly empathetic person.

The family plans to have a Catholic service and a celebration of life to complete Lori’s wishes in the spring of 2022. Arrangements are by Schnackenberg Funeral Home in Libby. Online condolences and memories may be made to www.schnackenbergfh.com.