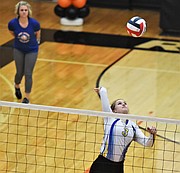 The Lady Loggers saw no quarter against the Polson Pirates, falling in three games on Oct. 30.

The Lady Loggers landed two service aces against Polson with Kelsey Johnson and Mariah Goucher each securing one. Julia Martineau and Ember Rode led Libby with six and five kills respectively. The Lady Loggers had a total of 18 kills.

The Lady Loggers will face Browning in their play-in match at home.