Loggers show signs of improvement in loss to Lakers

Tripp Zhang slides during a loss to the Kalispell Lakers on May 26. (Paul Seivers/The Western News)

The Libby Loggers fell 14-4 to the Kalispell Lakers on May 26. (Paul Sievers/The Western News)

After keeping Kalispell in check for five innings, the Loggers floundered late in their May 26 game against the Lakers, eventually falling 14-4.

A Class AA team, Kalispell has long been a difficult opponent for Libby. Coach Kelly Morford noted that despite their defeat, the Loggers performed better against the Lakers in this latest game than they had earlier in the season. The first time the two teams met in early May, the Lakers built an early lead and came away with a 21-3 win.

But Morford found it hard to compare the two games considering how far the Loggers have progressed this season. 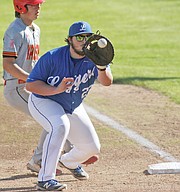 The Libby Loggers fell 14-4 to the Kalispell Lakers on May 26. (Paul Sievers/The Western News)

“I feel like we’re a different team than when we played them last,” Morford said.

Following a string of bitter defeats, the Loggers saw success during last weekend’s Loggertown Wood Bat Classic. While Libby lost two of their three games, all of the margins were tight and Libby showed improvement on defense.

Thanks to their sharpened fielding skills, the Loggers were able to hold back the Lakers at the start of the May 26 game. Neither team got a player around the bases in the first two innings.

Caden Williams started for the Loggers on the mound and was later followed by Aydan Williamson and Tucker Masters.

The Lakers drew first blood in the top of the third when Caleb Morgan stole home on an error. A few pitches later, Koel Willis made a base hit to earn Kalispell’s first RBI. The Lakers went into the bottom of the third with a 3-0 lead.

Though Libby’s Tripp Zhang landed a base hit and stole second, the Loggers failed to generate any runs during their next at bat.

Reflecting on Libby’s batting, Morford said overall the Loggers could have done a better job making connection with the ball.

By the bottom of the fifth inning, the Lakers had spaced out their lead to 5-0. Libby’s Landon Haddock responded with an RBI double that sent Hunter Hoover home.

During the top of the sixth inning, the Loggers began to lose their defensive edge. Landing a series of hits, the Lakers ran the score up to 12-1. At around this point, Morford said Libby’s confidence faded.

“It was mostly all mental,” he said. “When things get tough we just need to stay focused and keep competing. I think that’s probably the biggest takeaway.”

Zhang felt the Loggers fell behind because of fielding and pitching errors.

“The big thing was … to keep throwing strikes. Being consistent throwing strikes was the biggest deal,” he said. “Not letting balls drop … picking up balls and throwing people out is a really big part of the game.”

Back at bat in the bottom of the sixth, Libby’s Caden Williams secured an RBI, batting in Zhang. A hit deep into right field by Williamson brought Masters home. Cy Williams batted in Caden Williams a few pitches later. The 12-4 score kept the Loggers in the game going into the seventh inning.

While Kalispell spaced out their lead by another two points, the Loggers were unable to secure any more runs.

The Loggers will go on to play Bonners Ferry at home on May 28.