Tripp Zhang at pitcher catches a pop-up fly for the first out top of third inning vs. the Riverdogs of Clark Fork. (Paul Sievers/The Western News)

Orion Plakke dives back to first base as Aydan Williamson checks his runner on a throw from pitcher Tripp Zhang top of fifth inning. Loggers over Riverdogs 6-4 in seven innings. (Paul Sievers/The Western News)

After suffering a string of staggering defeats in the opening month of their season, the Loggers came away from the tourney with two near-wins and their first victory of the year.

Orion Plakke dives back to first base as Aydan Williamson checks his runner on a throw from pitcher Tripp Zhang top of fifth inning. Loggers over Riverdogs 6-4 in seven innings. (Paul Sievers/The Western News)

“We wanted to win and we finally kicked it into gear,” said Aydan Williamson following Libby's 6-4 Sunday win against Clark Fork.

Coach Kelly Morford attributed the change in tempo to an improvement in the team’s defense. Despite struggling on the mound earlier in the season, the Loggers’ pitchers had gained confidence going into the tourney.

“Our pitchers threw strikes and mixed up their pitches,” said Morford. “That just sets the tone for the whole game.”

During Libby’s final game of the tournament against Clark Fork, Tripp Zhang pitched all seven innings. A longtime center fielder, Zhang surprised the team with his arm a few games into the season. Against the Riverdogs, he threw [TK TK TK] strikeouts and [TK TK TK] first pitch strikes. 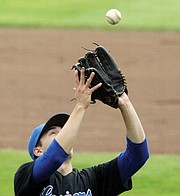 Tripp Zhang at pitcher catches a pop-up fly for the first out top of third inning vs. the Riverdogs of Clark Fork. (Paul Sievers/The Western News)

“After throwing a complete game, I’m ready to keep going,” he said after facing down Clark Fork.

Along with the ballclub’s pitchers, the rest of Libby’s infielders began to hit their stride in recent days. Younger players had to step up after the Loggers lost some of their top basemen last year.

Reflecting on the tournament, Morford said the Loggers still had some work to do on their batting. Nevertheless, Loggers saw success at the plate against Clark Fork.

In the top of the first inning, Caden Williams brought Zhang home on an RBI single. A few at bats later, Aydan Williamson landed an RBI double base hit with a pop fly to right field.

Williamson brought Tucker Masters home in top of the third with an RBI groundout. An error by Clark Fork’s catcher allowed Williams to steal home on the next pitch.

In the fifth inning, Williams stole home on another error from the Riverdogs’ third baseman.

Libby’s first game of the tournament on Friday turned into an eight-inning defensive slog against the Missoula Eagles. At the bottom of the seventh, neither team had gotten a player around the bases. In the eighth inning, Missoula squeezed in a run ending the game with a 1-0 loss for the Loggers.

On the mound, Williams led both the Loggers and the Eagles with 20 first pitch strikes in just over seven innings. Williams also threw 11 strikeouts, three more than Missoula’s lead pitcher. Zhang led the Loggers at the plate with two hits.

The following day, the Loggers put up a strong fight against Mt. Spokane, falling 5-4. By the bottom of the fifth, the game was tied 3-3. In the seventh inning, the Loggers slipped, scoring one run to Mt. Spokane’s two.

Rusty Gillespie held the mound down for the Loggers for just over five innings. He threw 11 first pitch strikes, the most of any pitcher that night. He also led both teams with nine strikeouts.

Williams secured two hits for the Loggers and Gillespie landed the team’s only RBI that night.

The Loggers are scheduled to play Kalispell at home on May 26.