Loggers reflect on season after falling in divisionals

Caden Williams looks to get around a defender during the Loggers Feb. 23 game against Browning. (Will Langhorne/The Western News) 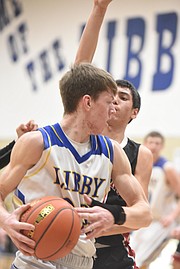 Caden Williams looks to get around a defender during the Loggers Feb. 23 game against Browning. (Will Langhorne/The Western News)

Sophomore Ryder Davis drives to the basket during the Loggers's Jan. 2 season opener against Frenchtown. (Will Langhorne/The Western News)

After a hard-fought season, the Libby Loggers ended their year at the Western A Divisional tournament in Butte.

The Loggers fell 48-36 to the Frenchtown Broncs on Feb. 25 and were bested 53-35 by the Hamilton Broncs the next day.

Looking back on their opening game of the tournament, Libby junior TJ Andersen said the Loggers were able to keep pace with the Broncs early on. The first quarter closed out 15-14 for Frenchtown.

Libby slumped, however, scoring four points to the Broncs’ eight in the second quarter. Andersen said he got into foul trouble early in the game, which made it difficult for the Loggers to lock down Frenchtown’s forward. Standing at 6-foot-4, Andersen was a key player for the Loggers in the paint this season.

Libby coach Josh Bean said the Loggers yielded 12 turnovers by the half, seven or eight of which were due to offensive fouls.

In the third quarter, the Loggers stopped some of the bleeding by matching Frenchtown’s 12 points.

Caden Williams proved instrumental for Libby’s offensive game, leading the team with 17 points. Following the Loggers Feb. 23 play-in game for a spot at divisionals, Bean commended Williams for his skill on both sides of the court.

In the fourth quarter against Frenchtown, the Loggers fell behind once more, putting up just six points to the Broncs’ 13.

Going into their second and final divisional game Feb. 26, the Loggers focused on establishing a quick start, according to Beagle.

“We tried to play our game and not let them shoot,” he said.

But Hamilton got out ahead early racking up a 19-5 lead in the first quarter. Andersen said the Loggers had a hard time contesting the Broncs three-point shooters, especially early on.

“They live and die by the three,” said Beagle.

Williams once again led Libby on the scoreboard with 10 points. Beagle followed with six points.

In the second half, the Loggers kept pace with the Broncs putting up 10 points to Hamilton’s 14 in the third quarter and 14 to their 11 in the fourth.

Reflecting on his senior season, Beagle said that while there were some goals he had hoped to achieve — like making it to the state tournament — he was proud of how the Loggers performed.

Securing a 62-60 win against Thompson Falls, a Class B team that reached the state tournament in their division, was a high point for Beagle. Defeating Whitefish twice and Browning three times were other highlights of the year.

“To beat a team three times, anywhere you go, is tough,” said Bean after the Loggers bested Browning at their divisional play-in game.

Making it to divisionals was also a mark of success for the Loggers. Last season, Libby fell to the Ronan Chiefs in their play-in game.

Bean said it was tough saying goodbye to this year's class of seniors. Beagle has served as the Loggers point guard for three years. Ryker McElmurry was a key hustle player for Libby and inspired the team with his energy.

Andersen has high hopes for the Loggers going into next season. By putting in more practice at summer tournaments and hitting the weight room during the offseason, Libby players could up their chances of making it further into next year's divisional tournament.

Williams was recognized as an all-conference and all-state selection. Andersen and Beagle were honorable mention conference selections, according to Bean.