With help from Masters, Libby rallies against Eureka

The Kootenai Valley Rangers may have gotten the jump on the Loggers during their June 18 county rivalry matchup, but they didn’t stay ahead long. Thanks to a late game rally and a walk-off home run, Libby bested Eureka 8-5. 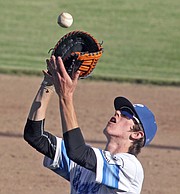 In the opening innings of the game, coach Kelly Morford experimented with different pitchers, drawing at times from the B team to give A team arms a rest. Caleb Moeller, a B team player, held down the mound for the opening two innings, throwing nine first strike pitches.

The Rangers landed the first run on an RBI base hit in the second inning. For the next two innings, the Libby and Eureka defenses kept each other in check. In the top of the third, David Bailey, another B team player, replaced Moeller in the mound. Over the next two innings, he racked up two strikeouts for the Loggers.

“We had a great showing from those B guys,” said Morford. “Those guys are going to give us some depth later in the season."

Tucker Masters is all smiles after knocking in the game-winning home run during the Libby Loggers June 17 matchup against Eureka. (Paul Sievers/The Western News)

Eureka built on their shaky lead during the fifth inning with an RBI double. The following inning, the Rangers pressed ahead with three more runs bringing the score to 5-0.

The seven-inning game seemed to be in Eureka’s hands until the Loggers flipped a switch in the bottom of the fifth. Tucker Masters said Libby committed to turning the tide after a talk in the dugout.

“We were like, ‘We have to start playing real baseball,’” Masters said.

Rusty Gillespie opened the inning for Libby with a base hit. Thanks to hits from Bailey and Aiden Rose, Gillespie progressed to third base. Cy Williams sent him home with an RBI base hit.

Back at the top of the lineup, Tripp Zhang slugged a ball into right field, bringing home Bailey. A base hit from Tucker Masters allowed Williams to make it home. Landon Haddock then tied the score going into the seventh inning with a two-RBI single.

Hunter Hoover held down the mound for the rest of the game for Libby. Going into the game, Morford said he hadn’t expected to have to put in Hoover but was glad he had.

“He got in there and he threw strikes. That’s kind of just why I stuck with him,” said Morford.

Hoover said he was proud of the team for coming together to secure the win.

“My coach [said] ‘bear down’ to me and I just knew I had to for the team,” said Hoover.

In the seventh, neither team secured a run, pushing the game into extra innings.

The stands went wild in the bottom of the eighth inning when Masters slugged a ball 322 feet over the left field fence. The home run brought home Zhang and Chase Rayome and secured an 8-5 win for the Loggers.

After the game, Morford said he had given Masters the bunt signal just before his three-run shot.

“It shows how good of a call that was,” said Morford. “I’m glad he missed the sign.”

Masters said he saw the signal but thought Morford was motioning the runners to steal.

“I swung away and it happened,” said Masters. “I was very excited.”

The home run is Masters second of the season.

The Loggers fell 16-1 and 19-5 in their June 19 doubleheader against the Mission Valley Mariners. Libby is scheduled to play in the Big Bucks tournament at home this weekend.