Officials with Stimson Lumber Co. were on hand in Libby last week to drum up support for a plan to place a conservation easement on more than 27,000 acres of company land in Lincoln County.

“We grow trees; that’s our business,” said Barry Dexter, Stimson’s director of inland resources. “We also feel like we’ve got some of the best habitat in northwest Montana in private hands. It’s important to make that available to the public, but at the same time keeping it working forest.” 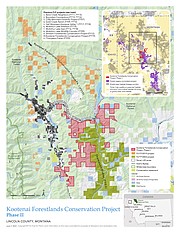 The unconnected tracts dot the landscape to the south and east of Libby. Firm plans for the proposal emerged earlier this year, branching out of conversations between state agencies, nonprofits and timber companies.

Montana’s Department of Fish, Wildlife and Parks is spearheading the effort to buy the easement, but money for the purchase would come from the National Fish and Wildlife Foundation, Montana Fish and Wildlife Conservation Trust and the U.S. Forest Service Forest Legacy Program.

Stimson is willing to sell the easement at below market value, but the market has shot up 83 percent since FWP first took a look at the area in 2019, according to the Daily Inter Lake. The purchase is now valued at about $16.3 million, according to an FWP draft environmental assessment.

So far, the National Fish and Wildlife Foundation has pledged $470,000 toward the project with another $50,000 coming from the FWP Conservation Trust and $6 million from the Forest Legacy Program. Still, officials are looking for other funding sources, according to the project executive summary.

The land under consideration borders, at points, the Kootenai River, straddles a portion of Libby Creek and abuts the 142,000-acre Thompson-Fisher Conservation Easement. The location, recreational opportunities, the wildlife that inhabits the area and the likelihood of future development played into the decision to go after the easement.

“It’s a really fabulous piece of property as far as fish and wildlife is concerned,” said Kris Tempel, a habitat conservation biologist with FWP.

But it’s also the type of land highly sought after by developers. Project documents describe the acreage, particularly that near running water, as offering an “existing network of forest roads that provides easy access, relatively gentle terrain and exceptional views.” Local officials are limited in blocking development in the area were it sold for development, the document noted.

Standing before a small group of area residents on July 14, Dexter described the prospect of seeing the land parceled out and built up as the antithesis of Stimson’s vision for the property.

“Selling it, making it private land, it becomes locked up and we’re not going to be able to use it again,” he said.

Dexter, Tempel and other representatives from Stimson, FWP and the Trust for Public Land were in the Ponderosa Room of Libby City Hall for a public hearing on the conservation easement.

The meeting drew a handful of residents. FWP representatives sought to start it off with an informal question and answer session, but most of those in attendance were more concerned with access to a mining claim through Stimson land than the easement. When not pressing Stimson’s delegation to remove gates on the company’s property, they pushed for the company to commit to bringing a mill back to the area.

Several cited concerns about the local bear population and worried that the easement would increase interactions between the animal and humans. FWP representatives argued that protecting the habitat could lessen those confrontations.

As for formal comments on the proposal, they were positive, if few. Resident Dorian Boling backed the easement, saying she felt securing public access was of critical importance in Lincoln County.

“As long as public access is always allowed on Stimson property, or any property, it’s good,” she said.

Bruce Vincent, a local environmental consultant, similarly offered praise for the idea. It preserved public access while allowing the land to be worked, he said.

FWP is accepting comments on the proposal, which can be found at http://fwp.mt.gov/news/public-notices, until 5 p.m., July 28. Written comments can be emailed to Tempel at ktempel@mt.gov or sent to the department’s office in Kalispell at 490 N. Meridian Road.

The Region One supervisor for FWP will make a recommendation to the Fish and Wildlife Commission following the closure of the comment period.