Libby senior Kayley Svendsbye looks for the pass during the Lady Loggers Feb. 2 game against Polson. (Will Langhorne/The Western News)

Libby senior Olivia Gilliam-Smith goes up for a shot during the Lady Loggers Feb. 2 game against Polson. (Will Langhorne/The Western News)

Libby senior Elise Erickson looks for the pass during the Lady Loggers Feb. 2 game against Polson. (Will Langhorne/The Western News)

In the last minute of the fourth quarter, it was anyone’s game.

When Libby coach Jackie DeShazer called a timeout with 47 seconds on the clock, the Lady Loggers were up on the Lady Pirates 33-32. Polson had possession.

The pep band played “The Imperial March” and chatter simmered in the stands as DeShazer prepped her squad.

Returning to the court, the Pirates pressed through Libby’s defense, getting the ball to Julia Barnard at the low post with 30 seconds left. As Barnard fired, she was poised to snatch back what had looked like Libby’s second win of the season.

But the shot went high, glancing off the backboard.

Securing the rebound, the Lady Loggers drove the ball into the Polson’s backcourt. Libby fans roared as Kinzee Boehmler sunk a free throw. Regaining possession, the Lady Pirates had a chance to tie the game with 17 seconds left. Though Polson managed to get the ball to the low post again, their shots went wide.

Coming off the court to wild applause and cheers, the Lady Loggers took the game 34-32.

While Libby had more than a fighting chance to secure the win in the final quarter, the game was squarely in Polson’s hands going into the second half. 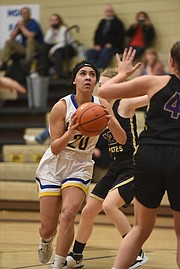 Libby senior Olivia Gilliam-Smith goes up for a shot during the Lady Loggers Feb. 2 game against Polson. (Will Langhorne/The Western News)

Sophomore Riley Boltz said the team fell behind because they were rushing.

Polson had forged ahead early, building a 22-12 lead. In the third quarter, Libby mounted a comeback.

Libby senior Elise Erickson looks for the pass during the Lady Loggers Feb. 2 game against Polson. (Will Langhorne/The Western News)

“We really knew that this was a beatable team,” said Libby senior Kayley Svendsbye. “At halftime, we knew we had to pull it together and give it our all.”

DeShazer said the Lady Loggers were able to close the gap by improving their offensive rebounding and setting good ball screens. 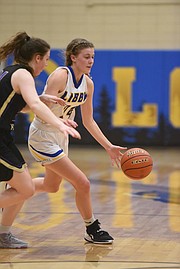 “We did a little bit better job in the second half of attacking rather than being on our heels,” she said.

At the end of the quarter, the Lady Loggers switched to a full-court press. Erickson took advantage of back-to-back Polson turnovers to help narrow the Lady Pirate’s lead to 25-29.

But exhaustion had set in. Going into the final quarter DeShazer said many of her players were gassed.

“There was all heart for the fourth quarter,” she said. “A lot of those girls didn't have much subbing tonight and they just went out and played like it was the first five minutes of a basketball game.”

Playing as the point in the Lady Loggers one-three-one defense, Gilliam-Smith led the charge, generating at least three turnovers and a couple steals. DeShazer said the defensive wings also excelled at denying the players in their zone.

Senior Gabby Fantozzi, who tied the game for Libby in the fourth, said the team was focused on getting shots up and not generating turnovers.

After the buzzer, officials kicked one of Polson’s coaches out of the gym for choice words about a referee's call. Even though the coach began cursing after the game was over, Libby Athletic Director Jim Germany said officials were allowed to expel him because referees were still on the court. The offense means Polson will have to forfeit their next game.

The Lady Loggers will go on to play Columbia Falls at home on Feb. 6.