After surrendering personal arsenal to feds, Kilgore back in district court

A Libby man brought up on federal charges after allegedly shooting a horse last summer is back in Lincoln County District Court.

Mark Allen Kilgore, 62, pleaded not guilty to felony counts of criminal mischief and criminal endangerment during his Aug. 2 arraignment. The charges stem from the alleged shooting of a neighbor’s horse with a .22 caliber rifle on June 23, 2020.

Authorities began investigating Kilgore shortly after the incident. The owner of the horse obtained surveillance camera footage showing a man approach the animals while hefting a rifle and later firing the weapon. She identified the man as Kilgore, who lived in a nearby Vanderwood Road trailer, court documents said.

But the investigation quickly involved the Bureau of Alcohol, Tobacco, Firearms and Explosives. According to documents filed in federal court, deputies with the Lincoln County Sheriff’s Office found silencers and short-barreled rifles in violation of state law in his home. They contacted ATF officials soon after the discovery. 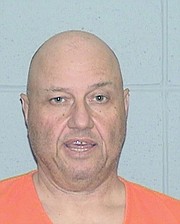 Federal investigators turned up three machine guns, 10 short-barreled rifles, three short-barreled shotguns, 32 silencers, two “destructive devices,” an undisclosed type of weapon, more than 100 other firearms and about 6,000 pounds of ammunition during a July 2, 2020 sweep of the home. Three of the firearms had the serial numbers removed, court documents said.

Kilgore struck a deal with federal prosecutors last October, agreeing to plead guilty to possession of a machine gun. In return, they agreed to drop the latter two charges. In a judgment filed in March, Kilgore was sentenced to five years probation and ordered to pay a court fee.

Meanwhile, in Lincoln County, felony charges resurfaced. Local prosecutors dropped the original charges without prejudice after federal authorities launched their probe, meaning they could file them anew at a later date.

The criminal mischief charge stems from Kilgore’s alleged shooting of his neighbor’s horse. The animal was found suffering from “obvious open wounds with visible dried blood and swelling,” wrote Deputy Brent Faulkner of the Lincoln County Sheriff’s Office in the 2020 affidavit filed in district court.

Criminal mischief carries a maximum punishment of up to 10 years with the Montana State Prison and a $50,000 fine.

An omnibus hearing is scheduled for Nov. 1 with a pretrial conference set for Nov. 29. Were the case to go to trial, it would begin Jan. 11.