It was a bold move to open The Coeur d’Alene Resort in 1986, but Duane Hagadone had the vision that it would succeed.

Duane Hagadone as a young newspaperman at The Coeur d’Alene Press.

Duane B. Hagadone, a private but devoted family man and an icon of publishing, real estate and hospitality, died Saturday at his winter home in Palm Desert at the age of 88.

“Since I was a boy, I was drawn to the lake,” he once recalled. “Lake Coeur d’Alene is magic. I’ve always been proud to call this place home.”

A man of few words, he never sought the limelight; he let his work speak for itself. He led by example. He was known for his far-reaching vision, high standards and extra touches he liked to call “sizzle.” 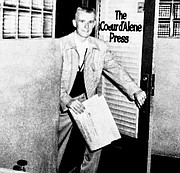 Duane Hagadone as a young newspaperman at The Coeur d’Alene Press.

His work ethic and attention to detail was evident in his very first job — caring for his family’s lawn. It looked so good the neighbors asked him to manage theirs, too.

While other boys worked one paper route, Duane shared that he worked three. His customers never missed a paper. When other boys got sick or skipped out, he’d cover their routes, too.

His father was an advertising salesman who became publisher of the Coeur d’Alene Press. Duane Hagadone considered his Dad his hero, mentor and best friend, and he worked at the newspaper after school and on weekends and learned how to run the flatbed press, set type and process photos.

He graduated from Coeur d’Alene High in 1950 and attended the University of Idaho for six reluctant months but returned to join his father in publishing. Burl Hagadone didn’t take it easy on his boy.

First, the young man had to canvass the hardscrabble mining town of Wallace for newspaper subscriptions in a bleak economy. When, against the odds, he excelled at that, he was allowed to sell classified ads for the eight-page Coeur d’Alene Press. He broke every sales record and was soon promoted to advertising salesman.

“I found that if I got in before everybody else, I could get more work done,” he recalled. “I didn’t take breaks, and if I packed a lunch, I could work straight through. I sat at my desk and made phone calls.”

By then his Dad was minority owner of the Coeur d’Alene Press. On weekends, father and son would share long talks about their shared dream of running a chain of newspapers together.

And then the bottom fell out of his world. His Dad was diagnosed with colon cancer, told he had six months to live.

Burl Hagadone never talked about his cancer or about dying. Instead, he made Duane promise to take care of his mom and his sisters. Burl wrote down a list of things he wanted his son to do. When Burl Hagadone drew his last breath, it was an unfathomable loss.

The Scripps brothers, who owned the newspaper, paid Duane Hagadone a visit, and said they’d had their eye on him for some time. Would he consider taking the helm? Perhaps he saw a chance to honor his Dad. Or the sense of work as an antidote. Certainly, it was a way to take care of his mom and his sisters, since he was now the man of the house. As he shook hands with the Scripps brothers, he looked them right in the eye.

He was 26 years old, the weight of the world now on his young shoulders. Those words would go on to define his life.

“Duane has always done everything first class,” says Jim Hawkins, former Idaho Commerce director and a childhood friend. “He learned everything from the bottom up and understood how it operated before asking anyone else to do it. He was never afraid to work, and nobody ever worked harder or longer than Duane Hagadone. At his desk, on the phone, talking to people all the time. He always had his finger on the pulse.”

In the late 1970s, Duane Hagadone met an exceptional woman named Lola, who quickly became the love of his life. His work schedule was fierce, but every chance he could, he set aside time so they could go sailing. They spent idyllic afternoons on Lake Coeur d’Alene in his Ericson 36 sailboat, and soon they were married.

He bought a cabin in Casco Bay, accessible only by boat, which became the family home. Their children have fond memories of Dad teaching them how to drive a boat, and how meticulously he took care of his craft. Every day, he commuted to work across the lake by wood boat. There was always an intriguing James Bond style about the man who had a telephone in his custom golf cart and who delighted in surprising guests by suddenly veering his amphibious car into the lake.

“The thing that always impressed me most was his vision,” says his retired corporate jet pilot, Al Goodwin. “He could stand back and look at something, and I would see one or two things, but Duane Hagadone would see nine or 10.”

In 1986, that vision resulted in the opening of The Coeur d'Alene Resort, a 338-room hotel on the shores of Lake Coeur d'Alene. More than 60,000 people, a crowd equal to half the population of the Idaho panhandle at the time, stood in the springtime rain for a chance to see his handiwork.

The project had been completed at the astonishing speed of 17 months.

“I’m a dreamer,” Hagadone told Forbes at the time. “And I’ve always thought, 'What a fantastic location for a really classy hotel.' It’s been on my mind for the last 15 years.”

That risk was rewarded handsomely. The Coeur d’Alene Resort has had visitors from a majority of the countries in the world and garnered top awards in every leading travel publication.

In the early 1990s, Hagadone unveiled another surprise: A floating golf green, the only one of its kind at the time in the world. The idea came in a sudden brainstorm. An avid golfer, he had watched on TV as Lee Trevino made a hole-in-one on the island green at PGA West in Palm Springs. The next morning, as was his habit, Hagadone drove around to check on his properties with his dog by his side. He had purchased a former sawmill site on the northeast shores of Lake Coeur d’Alene and envisioned a golf course there.

"I looked out on the lake and saw a perfectly round log boom,” he recalled. “A light came on. If they can have an island green in the desert, why can't we have a floating green on Lake Coeur d'Alene?"

That green has since been host to international tournaments, lavishly awarded for its impeccable greenkeeping and recognized throughout the world of golf.

“Duane Hagadone was the most creative genius of anyone I know,” says longtime friend Harry S. Rinker, a fellow self-made man, real estate investor and developer. “Whatever he turned his attention to, he achieved at an extremely high level, whether it was a home, a business or a yacht.”

“They broke the mold when they made Mr. and Mrs. Hagadone,” says architect Guy Dreier, a frequent collaborator. “We always said Mr. Hagadone was a ‘gentleman's gentleman.’ He trusted me and respected my expertise. He was famous for saying, ‘I am going to challenge you’ on every important design problem. It was brilliant, because it made you dig deeper for a solution. He was so good at bringing that out of all of the people involved in these projects.”

In 2004, Hagadone was honored with the Horatio Alger Award by the Horatio Alger Association of Distinguished Americans. The award recognizes “outstanding Americans who exemplify dedication, purpose, and perseverance in their personal and professional lives who have often achieved success in the face of adversity.”

The group offers scholarships to high school students who face major obstacles. Hagadone was always pleased to know that the group had awarded $223 million to students, with a 71 percent scholar graduation rate compared to the national low-income graduation rate of 16 percent.

Often quietly, Duane and Lola Hagadone have been major contributors to charity. There are few causes in Coeur d’Alene which have not benefited from his generosity.

“In giving two million dollars to help make the Boys & Girls Club of Kootenai County a reality, he created a true legacy,” says businessman Ron Nilson. “I think about the Kroc Center, the Humane Society, and so many generous donations over the years. I look at a man who’s done so many things for our community, and never stood up to take any accolades.”

In 2006, Hagadone was named the Idaho Business Leader of the Year by Idaho State University. Over the years, untold thousands have worked for him, learning the value of work, punctuality and professionalism.

“Before I ever met Duane, I heard about him by reputation,” says Dennis Washington, owner of The Washington Companies. “His airplane hangar had a unique design, and the cleanliness and quality of construction was outstanding. What a smart guy he was, and what an uncommon eye for detail he had. I’ve always respected Duane for his character and his unique ability to achieve whatever he sets out to create.”

Anyone who knows Duane Hagadone will acknowledge that business was his greatest sport. He took much care to study and understand each of his operations and keep in personal touch with each of his managers. He has left his companies in strong and capable hands.

When he did take spare time, he enjoyed golfing, travel and boating. He designed and built the groundbreaking 205-foot Lady Lola and cruised it to a bucket list’s worth of destinations. He said his greatest pleasure in all those travels was showing his grandkids a bit of the world.

Duane was preceded in death by his first wife Nancy, and granddaughter Tina. He is survived by his wife, Lola, and his children Brad and wife Teresa, Todd and partner Adam, and his stepchildren Dennis and wife Lynn, Paige and husband Steve, sisters Joany and husband Dave, Kay and husband Roy, grandchildren Taj, Shayla, Morgan, Bo, Madi, and Reilly and his faithful German shepherd, Winnie.

All his life, Duane B. Hagadone lived by his own strict personal code of honor. He was a man of habit, precision and accountability. But he was more than that, too.

His survivors speak passionately about the family man they knew and loved, emphasizing that while most people only saw the business or philanthropic side of him, Duane Hagadone relished the time and experiences he shared with his wife, children and grandchildren. The adoration was eagerly reciprocated.

At the end of his life, he could be content in knowing that the list his father gave him, that request to care for family and business, has been carried out one hundredfold. His vision is evident in the things he built and improved, and his heart lives on in the people he helped encourage and build; their careers a living legacy to his greatness.

David Kilmer has worked for Duane Hagadone for 30 years, beginning as a reporter at the Priest River Times in 1991, and has learned immeasurably from the man.