Jeremy Canary opened Smoking Gun BBQ on Mineral Avenue in August. Despite the pandemic, business has been booming for the local eatery. (Will Langhorne/The Western News)

Jeremy Canary opened Smoking Gun BBQ on Mineral Avenue in August. Despite the pandemic, business has been booming for the local eatery. 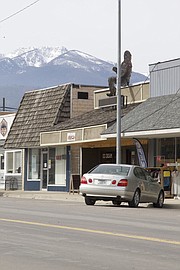 Jeremy Canary opened Smoking Gun BBQ on Mineral Avenue in August. Despite the pandemic, business has been booming for the local eatery. (Will Langhorne/The Western News)

Jeremy Canary opened Smoking Gun BBQ on Mineral Avenue in August. Despite the pandemic, business has been booming for the local eatery.

When Jeremy Canary opened Smoking Gun BBQ in August, he was concerned that the pandemic might hamstring his business.

But if there’s one thing the coronavirus hasn’t changed, it’s the demand for good barbecue.

“It’s crazy some of the days how busy we are, even with the pandemic and restrictions,” he said last week.

Smoking ribs and pulling pork are longtime passions for Canary. He began dreaming of opening a barbecue restaurant roughly 26 years ago while working in the health care industry.

Between shifts as an EMT in Georgia, Canary learned to make dry rubs and fine-tune his smoking temperatures with old-time pitmasters. After moving to Libby to serve as a manager at Cabinet Peaks Medical Center in 2017, he continued perfecting his recipes.

While on a conference call one day, Canary noticed the old CC’s Ice Cream and Candy shop building sitting vacant on Mineral Avenue. His dream of starting a barbecue joint began to percolate again.

“This thing is sitting here empty, so I’m like, ‘Well I’m going to figure out who’s got it,’” he said.

After getting hold of the building, Canary redecorated the interior and squared away his menu. Hoping to get a boost from the foot traffic generated by Ignite the Nites, Canary opened the Smoking Gun the weekend of the annual car show.

Launching in the middle of the coronavirus pandemic required Canary to take additional public health measures. For example, he learned from county health officials that he was barred from putting condiment containers on his tables.

Canary said it helped, though, that most of the pandemic restrictions were already in place when he opened shop.

“We kind of built a model around how much takeout do we need to survive and anything over that is just a bonus,” he said. “I think it helped us a lot … just to be able to say ‘OK, we know what we’re getting into and nobody’s going to change the rules two weeks into it.’”

While business dropped off in November and December when the county experienced a flare-up in coronavirus cases, Canary said the recent relaxation in pandemic measures has spurred an uptick in customers. Almost every day, he hears from folks who stop in after driving by the restaurant for months without noticing it.

“I think it takes people six months to a year to realize when something new is there,” Canary said.

Canary’s philosophy when building the restaurant’s menu was to stick to the essentials. While other restaurants might have scores of offerings, the Smoking Gun focuses on doing barbecue well.

“If you come in and get barbecue this weekend, it’s good. If you come back in a month, it’s going to be good,” he said. “If you want a hamburger, I don’t do hamburgers. Someone else can do better hamburgers.”

Along with pulled pork and brisket sandwiches, Canary said the Smoking Gun’s barbecue pizzas are popular.

Hotdogs and sides of baked beans, coleslaw and cornbread help round out the menu. The joint’s floats and ice cream sandwiches are also customer favorites.

With the recent boost in business, Canary said an expansion might be on the horizon for the Smoking Gun.

“We’re hoping to ... get more seating area, just kinda looking for a bigger location,” he said. “We figure if the pandemic goes away and we’ve been doing this well, the people of Libby have welcomed barbecue and we’re happy about that for sure.”