As the Callahan Fire swelled to 1,200 acres, U.S. Forest Service and local government officials briefed residents on their efforts to battle the blaze during a Sept. 13 public meeting.

Justin Erickson, incident commander, was among those who addressed the crowd that gathered in the park lot in front of the Three Rivers Rangers District office in Troy.

Erickson said the fire, which is burning nine air miles southwest of Troy, started at a trailhead at the base of Smith Mountain on Sept. 8. While officials are still investigating the cause of the fire, Erickson said he assumes the blaze began with a campfire. 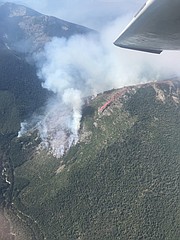 An engine crew headed up Smith Mountain on patrol was the first to spot the fire, according to Erickson. Although the crew was able to quickly get to the scene, Erickson said it spread rapidly across the steep terrain.

“We had it at about five acres within a few minutes,” he said. “It was 15 by the time we actually engaged.”

By the following morning, officials reported the fire had reached 20 acres and 25 firefighters were battling it with engines and aircraft. That evening the fire reached 50 acres and was burning up the steep timbered terrain in the South Callahan Drainage.

For the next two days, Erickson said the fire roughly doubled in size. During the first two days of the fire, air support was used to suppress the blaze. Since the fire is concentrated in a burn scar dating back to 1992, Erickson said retardant worked well to moderate the flames. Smoke from fires in Oregon and California settled over the area on Sept. 11, rendering air support null.

Officials attributed the fire’s rapid expansion on Sept. 12 — it grew to 1,000 acres — to dry conditions, spotting and dry, south-facing slopes. Southwesterly winds, which grew to between eight and 11 miles per hour, also contributed to its growth.

Four fire trucks, two excavators, a masticator and a dozer were battling the blaze on Sept. 13. Officials had also ordered another masticator, according to Erickson.

Dan Rose, forest fire management officer for the Kootenai National Forest, said he expected winds to pick up out of the south on Sept. 14. While the winds may help the fire spread, Rose said they could also help reduce smoke and allow air support efforts to resume. Rose pointed out the southern gales will only keep the fire moving north and away from Troy.

Brent Teske, deputy director of the county Emergency Management Agency, told the crowd to sign up for Code Red, the county’s emergency notification system. Residents will receive alerts via text, email and phone call from the system.

“This is good for about any situation,” Teske said. “We could have a bad winter, long power outages, flooding fires, anything at all.”

Residents can register for the service on the county’s website.

Sheriff Darren Short reminded those at the meeting of the county’s reverse 911 call system. In case of an emergency, Short said a phone call will be sent out to all landlines withn the area of concern. According to Short, the calls would come from either Libby or Troy dispatch.

Teske told the crowd that there currently were no evacuation or pre-evacuation plans in the county. While Facebook users have circulated concerns regarding evacuations, Teske said these were unfounded.

“If there was [an evacuation order], it wouldn’t be a notification from Facebook,” Teske said. “You’d be officially notified from a sheriff, law enforcement officer or [volunteer] representative.”

The Sheriff’s Office in conjunction with the incident management team would issue evacuation orders according to Short.