The Dillon Beavers chewed through the Libby Loggers 34-14 during their Oct. 9 matchup.

Graham drew first blood scoring a touchdown off a three-yard pass from Fitzgerald. A successful extra point kick brought the score to 0-7 with two minutes in the first quarter.

The Loggers took to their home field in their signature wishbone offense. While the run-heavy scheme has paid off for Libby throughout the season, the Loggers had trouble moving the ball on the ground against the Beavers.

Libby head coach Neil Fuller said the team was down two of their best offensive linemen: Juniors Zane Brown and Zane Nordwick were both out for the Dillion matchup. Libby’s weakened line allowed the Beaver defense to dam up the field and keep Logger running backs Dawson Young and Ryder Davis from racking up yardage.

Young scored once for the Loggers in the second quarter with an 80-yard kick return touchdown. Junior kicker Aydan Williamson brought the score to within a touchdown with 10 minutes and 50 seconds left in the second half.

While senior quarterback Jay Beagle tested a couple pass plays during the second quarter the strategy did not pay off the Loggers. In the final minutes of the half, Beagle — under pressure — threw an interception pass to Beaver defensive back Eli Norse.

In the third quarter, the Loggers continued to focus on their ground game with Beagle counting on Davis and Young to slog the ball down the field.

With four minutes and 40 seconds left in the third quarter, Young carried the ball into the end zone from the one-yard line. Williamson brought the score to 20-14 with an extra point kick.

Fitzgerald kept pressing the Loggers with short, pass-heavy plays. With a minute left in the third quarter, Fitzgerald ran the ball into Libby’s end zone.

In hopes of closing the margin, the Loggers switched to a shotgun offense. Young and Davis joined senior tight ends Dave Patterson and Tucker Masters as receivers.

The Loggers’ passing game was met with mixed results. With five minutes left in the game, Beagle threw an interception. After Williamson recovered the ball two plays later on a fumble, Beagle was able to move the ball up the field with completions to Patterson and Davis.

The push was not enough, though. The Loggers turned over the ball at Dillon’s 33-yard line. With one minute and 40 seconds left in the game, the Beavers took a knee to run out the clock.

Following the game, Young said the errors and penalties the Loggers racked up throughout the night led to their downfall.

“We just made too many mistakes,” he said.

With only two games left in the season, the Loggers have a 5-2 record. Libby’s remaining matchups against Hamilton on Oct. 16 and Frenchtown on Oct. 23 will determine the Loggers fate in the postseason.

Only eight teams this year — as opposed to 12 in past years — will move onto the Class A state championship. The Montana High School Association executive board decided to reduce the number of teams that progress to the playoffs due to concerns related to COVID-19. The top four teams in Eastern A and Western A will face off in the postseason, which will run from Oct. 30 to Nov. 14.

Libby will play the Hamilton Broncs at home during their Oct. 16 matchup. 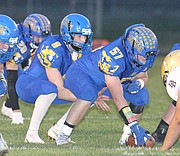