Despite mounting pressure to loosen restrictions surrounding high school graduation, Superintendent Craig Barringer said the Libby Public School District would keep the cap on the number of tickets given to each senior at four.

“We went from no graduation to a marginal graduation ceremony … and understandably people want to expand that,” he told members of the Libby Public School Board on May 11.

Although the COVID-19 pandemic and associated government restrictions left many end-of-year school events cancelled or delayed, district officials have stressed the importance of celebrating graduation one way or another. Earlier this year, Barringer described it as a milestone that teachers and administrators have been preparing students to reach for 13 years — and one not to be taken lightly.

Administrators last week unveiled plans for a circumspect graduation on May 30. The proposal calls for using the Libby High School football field and track. Rather than rows of students seated before a podium, officials will spread the teenagers out along the track to maintain social distancing guidelines.

A stage will play host to, at most, four people, including the class valedictorian and salutatorian.

And, apparently contentiously, each graduating senior will receive four tickets to disperse among friends and family. Each set of a student’s well wishers would be grouped together on the football field’s bleachers in fours with adequate spacing between clusters of onlookers.

Administrators have partnered with NFHS Network to live stream the celebration online for those who cannot secure tickets.

Barringer told the school board that since the district announced the restrictions — a flyer was posted to social media last week — parents had lobbied him to allow more attendees.

“I’ve been contacted a few times and asked, ‘Why four tickets? Why not six? Why not eight?’ We went by Lincoln County’s guidelines,” he said. “Four was the number we could get into the bleachers and adhere to all the separation guidelines.”

School Board member Alida Leigh reported already hearing about families negotiating with one another for extra tickets.

Even if that’s the case, onlookers would need to be sorted into groups of four to meet the state and county guidelines, said Jim Germany, assistant principal of the Libby Middle High School.

“By rule, you can’t be sitting six people in a group and two in a group,” Germany said.

But, outside of verifying identifications at the gate, there is no way to prevent families from swapping tickets.

“I’m not checking IDs,” Germany said. “If they’re going to do something out in the parking lot, that’s on them.”

One option to expand the audience size would be to open up both sets of bleachers, although spectators on the far side would not have a view of the ceremony, Germany said. Another would be to have people line up along the fence.

But Germany and Barringer also expressed concerns about entry and exit from the facility even with the limited number of onlookers. While they can stagger entry, it will be difficult keeping people leaving six feet from one another.

“We have to be sure we can manage what we do have,” Barringer said.

Barringer also said that the plan adopted by the district would remain in place regardless of outside pressure and despite any further easing of social gatherings by Helena.

“We’re three weeks out. We’ve got a schedule. We’re going to go with that schedule,” he said. “If the world opens up, we’re going with four [tickets per student].” 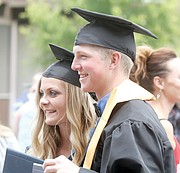