Working for and in one of the world’s ‘wild hearts’

Sandy Compton finds sacred ground in stone cathedrals carved by glaciers, in landscapes of cirques and tarns and scree. Hymns in this wild country rely on prolonged notes of silence punctuated by birdsong, by the gurgle of clear-running streams and, in season, by the bugling of bull elk.

Compton’s spiritual tie to wild places and his penchant for churches without walls are not unusual in northwest Montana. Nor is he an outlier because he found healing in the backcountry on the heels of a time years ago when his life felt broken.

Yet Compton’s life and work since 2009 for the Friends of Scotchman Peaks Wilderness have established a unique relationship to the rugged country that spans the Montana-Idaho border west of the Cabinet Mountains Wilderness.

Friends of Scotchman Peaks has paid him to be an advocate for wilderness designation for the Scotchman Peaks as the nonprofit’s program coordinator and leader of its trail crew.

On March 31, he’ll retire from those roles.

As a writer, Compton’s essays communicate musings about wilderness, about life and loss, about the aching joy found in wild places.

In “Heart of the World,” he writes: “I am sitting amidst the high sources of one of the wildest, most beautiful streams I’ve ever seen; in one of the wild hearts of the world. The earth has more than one wild heart, and each is a center of renewal, resilience and beauty.”

Mitchell “Sandy” Compton, 68, grew up near Heron, close to what is now a boundary of the proposed Scotchman Peaks Wilderness. His maternal grandparents settled just southeast of Scotchman peak in 1917 and he lives now on a portion of their old farm. His sister Susan lives next door. Brother Chris lives nearby and brother Kent plans to return soon from Boise.

Compton said his relationship to what became the proposed Scotchman Peaks Wilderness and vicinity began early.

“The first time I ever took a walk up the East Fork of Blue Creek I was 5 years old,” he said.

Yet Compton the wordsmith, and owner of Blue Creek Press, said during a recent interview that the draw of the proposed Scotchman Peaks Wilderness cannot be adequately articulated in words. The best path toward understanding, he said, is to experience the territory firsthand.

“The only way I could show you is to have you put on a backpack and walk with me back into Melissa Basin,” he said.

The U.S. Forest Service supervises the public lands within the proposed wilderness and since 1987 has managed the rugged landscape as “recommended wilderness.”

According to Friends of Scotchman Peaks, “Wilderness designation would protect and preserve the natural condition of the Scotchmans’ steep and deep valleys, which hold diverse communities of plants and animals, clear flowing streams and precious solitude.”

Compton said wilderness designation for the Scotchmans has grassroots support in Idaho and Montana but noted that achieving that milestone has been challenging.

Jack DeShazer of Lincoln County has spent time in the backcountry of the Scotchman Peaks and describes it as “crazy rugged.” He said he doesn’t understand why the 66,000-acre landscape hasn’t been designated as wilderness.

Compton’s work with Friends of Scotchman Peaks began as a part-time job. Among other occupations, he has worked as a waiter for Ivano’s Ristorante in Sandpoint, Idaho. He’s labored through the years as a logger and a sawmill employee as well.

“I was a good waiter,” he said, smiling. “People would come in and ask, ‘Can we have the surly waiter again tonight?’”

Compton’s humor leans toward dry. He can be flinty one minute and then choke up talking about the tribulations of a character in one of the short stories he has yet to publish.

He does not avoid writing or talking about his life’s lowest ebbs, many of which were tied to a gambling addiction that festered when he lived and worked for a time in Las Vegas. The gambling helped sunder his marriage. Then, his 3-year-old daughter, Amanda, died in an automobile accident in 1982.

Eventually, Compton embraced recovery and the surrender required to break the grip gambling had on his life.

“I finally came home in ’87, after my dad had died in ‘86, with my tail between my legs and involved in the recovery process,” he said.

Around 1990 or so, Compton became a backcountry denizen again. And it is clear from his writings that his experiences in the Scotchman Peaks yield a deep and elemental solace.

In “Heart of the World” he observes that in sanctuary of wilderness, “We humans are not the pulse of the earth, just an element of the flesh. Without what begins here, we would be dust and vague notions God never got around to inventing for lack of parts. Like everything else here, we are built with the tools of time and gravity, extraordinary circumstance and dumb luck. We are no more – or less – wondrous than rodents, bobcats, coyotes, elk or hummingbirds.”

It seems Compton has brought a spirit of equanimity to his work for the Friends of Scotchman Peaks Wilderness.

He said the organization emphasizes building consensus among people who occupy the middle ground between extremists on both sides of the wilderness debate. He said some environmental groups dismiss the nonprofit because of its willingness to seek common ground.

“We have people who call us quislings because we collaborate,” Compton said.

One dictionary defines “quisling” as “a traitor who collaborates with an enemy force occupying their country.”

Compton lauded the work of Phil Hough, executive director of Friends of Scotchman Peaks. He described Hough as a consummate diplomat.

“He is always trying to work things out,” Compton said.

In turn, Hough said the organization will miss Compton’s commitment to wilderness and his ability to capture its allure in words.

“’Growing up Wild,’ as he puts it, at the foot of the Scotchman Peaks, Sandy writes with a passion and connection to place that can’t be duplicated,” Hough said. “As a third generation Montanan, he’s deeply connected to the land and wants to preserve it for all the kids to come, so they too have a place where they can grow up wild.”

He said Compton has a unique blend of talents.

“He’s skilled with using traditional tools such as crosscut saws and Pulaskis,” Hough said. “He’s also accomplished as a storyteller and author. His written word captures the essence of wild places, both those that beat within our hearts as well as those found in the rugged landscape of the Scotchmans.”

Compton’s work for Friends of Scotchman Peaks has been honored by the Montana Wilderness Association and the Idaho Conservation League.

The wilderness association observed that Compton is “deeply rooted to the land that he and his family have lived in since the early 1900s and fiercely dedicated to protecting and stewarding wildlands in the Scotchman Peaks area.”

He founded Blue Creek Press in 2003. Its office is in the room in the old Heron Elementary School where Compton learned to read. The press provides varied publishing options, including subsidy publishing and text and photo editing.

And Compton will surely venture often into the landscape that he has loved since childhood. That wild terrain has inspired a host of essays.

“And all over lays silence enough to still the world’s most frantic souls. And under the silence, if you listen, you may hear the heartbeat of a planet.” 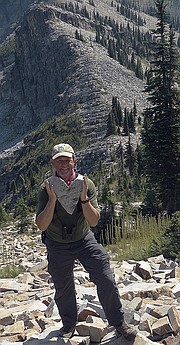 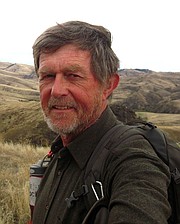