Peck, chairman of Lincoln County’s board of commissioners, said DEQ’s overview of asbestos-related sampling and cleanup activities it would not pay for is unacceptable because of the potential to burden residents with those costs instead.

“This affects all the property owners in Libby and Troy,” he said.

Peck spoke Wednesday afternoon during a commission meeting attended by several members of city councils in both Libby and Troy and by other officials, including State Sen. Mike Cuffe, R-Eureka, and residents.

“We are at a pivotal moment in the 20-year process we’ve been going through with the Superfund site,” Peck said.

The moment he referenced is the coming shift of oversight duties to DEQ from EPA for Operation and Maintenance of portions of the Libby and Troy Asbestos Superfund sites.

Peck said Wednesday that the county might be compelled to pursue litigation that could allow local government to bypass DEQ and deal directly with EPA.

As of April 1, unless something changes, DEQ will become the primary agency in charge of what the federal Superfund process refers to as Operation and Maintenance for Operable Unit 4 and Operable Unit 7. The process is intended to protect cleanup remedies from activities that could disturb or re-contaminate them.

Local government officials have beseeched the EPA and DEQ for years to clarify what would happen once remedial cleanup work is deemed complete and an emerging situation requires additional testing for the presence of asbestos and cleanup if it is found.

A central question has been: If that happens, who will pay for the sampling and cleanup?

Peck recently reminded DEQ Director Shaun McGrath of promises made in 2001 by a former EPA administrator that residents would not be saddled with cleanup costs.

Yet the five-page draft document recently received from DEQ describes circumstances in which this very thing could happen.

For example, DEQ said it would not pay for sampling and cleanup if a developer wants to subdivide a 20-acre lot and sampling of the property finds asbestos contamination.

DEQ’s memo notes, “The state has concerns about funding a windfall for a developer, wherein someone purchases property at a distressed price, receives funding to remediate it, and then sells the property at a higher price because of that remediation.”

“This just blows me away,” he said. “Who in their right mind is going to invest in Lincoln County under these conditions? It’s ludicrous. The economic cost to the county could be significant.”

Cuffe said communities can recover and thrive when developers buy distressed properties and sell them for a profit. He said it seems like McGrath’s DEQ is creating conditions that could anchor the region in blight.

The DEQ also reported that state-held funds for Operation and Maintenance “should not be used on properties where the homeowner has failed to maintain the remedy.”

The agency noted, “O&M funds are specifically for activities ensuring protection of the remedy. Public health impacts are beyond those activities and may be the responsibility of the local government agencies.”

Peck said he was stunned by the sentence about public health impacts, noting that dire proof about the effects of asbestos on public health was the fundamental driver for the Superfund process.

In early January, EPA released an 86-page draft Operation and Maintenance plan for OU4 and OU7 and accepted public comments through Feb. 6.

Comments by officials in Lincoln County restated a longstanding and adamant position: “…we want to reiterate our deep concerns surrounding the lack of clarity regarding liabilities on property owners. We cannot support any plan that fails to address these seminal issues.”

George Jamison, a member of the Libby Asbestos Superfund Oversight Committee and the Lincoln County Board of Health, sought input from the EPA before calculating cost estimates for sampling and cleanup work over the next 30 years.

“Mike Cirian and I disagree about some things and probably always will, but I give him a huge tip of the hat for at least listening to us,” he said.

Jamison, Peck and others have said they believe there is plenty of money to cover sampling and cleanup costs for decades to come.

Eventually, the EPA will augment the $12 million with funds, in an amount not yet determined, that weren’t spent during the remedial action phase of Superfund.

In addition, DEQ has about $5 million for Operation and Maintenance that came from a bankruptcy settlement with W. R. Grace and Co., the last owner of the vermiculite mine that was the source of the asbestos.

Finally, DEQ receives $600,000 a year in state funding until 2028. This money will fund the Libby Asbestos Superfund Oversight Committee, or LASOC, and other Operation and Maintenance activities.

“The fund is managed by DEQ, and the LASOC has authority to recommend to DEQ which O&M activities they believe should be funded,” DEQ notes in the draft memo received Feb. 27 by the county.

DEQ’s memo notes that the agency does not preclude evaluating situations on a case-by-case basis, including potential funding for cleanup of a new subdivision, if the Libby Asbestos Superfund Oversight Committee recommends that course of action.

Cirian was asked whether federal funds might be available for cleanup of asbestos contamination discovered at the site of a new subdivision if DEQ balked at picking up the tab.

“We are working with DEQ to clarify this situation,” Cirian said.

In a March 5 email, McGrath responded to the concerns cited by Peck and others.

“We shared the draft memo with the Libby Asbestos Superfund Oversight Committee for purposes of discussion,” McGrath said. “We welcome their feedback and look forward to having a full conversation on the subject at the next LASOC meeting, which is planned for the evening of March 18.”

The public meeting will be in Libby.

Fibers from the asbestos tied to vermiculite mining that began in the 1920s can embed in lung tissue and cause fatal lung disease. No one knows how many people in the region have died from the effects of asbestosis, mesothelioma or other cancers linked to exposure to asbestos-containing vermiculite mined, processed and shipped from Lincoln County and Libby.

What’s clearer is that mine owners, including W.R. Grace, and federal and state environmental and workplace regulators knew for years about the regional health hazards and did nothing — a legacy of neglect that has been alluded to by Peck and others in relationship to current conflicts with DEQ.

“We’ve been bureaucratically lied to,” Peck said during a recent meeting in Helena of the Libby Asbestos Superfund Oversight Committee.

In 1999, EPA responded to citizen and media concerns about exposure to asbestos from the vermiculite mine. Local activists and a series of stories in The Seattle Post-Intelligencer stirred agencies into action. EPA placed the Libby site on the federal Superfund program’s National Priorities List in October 2002.

The physical remedy for Operable Units 4 and 7 left contamination in subsurface soil and in “inaccessible areas where it does not present a risk of exposure,” according to the EPA.

“The EPA left the material behind in people’s houses and now the EPA is out of here. Is the homeowner now responsible for sampling and cleanup?” Peck said recently.

Participants in Wednesday’s commission meeting wondered whether the April 1 transition date could be postponed to iron out some of the differences between local officials and DEQ.

Meanwhile, the county’s Asbestos Resource Program will continue working with property owners and contractors to provide information about “best management practices” that are relevant to work that might be performed on their properties.

Cirian said EPA is working on its response to comments on the draft Operation and Maintenance Plan for OU4 and OU7.

“We do not have a date for our responsiveness summary at this time,” he said.

The next meeting of the Libby Asbestos Superfund Oversight Committee is scheduled to be in Libby on the evening of March 18. Peck said more details about the public meeting should be available soon and encouraged people at Wednesday’s commission meeting to plan to attend. 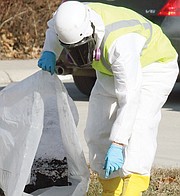