Libby’s Ryan Goodman goes up for a shot during a Feb. 24 home game against the Ronan Chiefs. (Duncan Adams/The Western News)

Someone or something lit a fire beneath the Ronan Chiefs during their fourth quarter comeback against the Libby Loggers in a Feb. 24 game at Libby High School.

The boys from Ronan High School scored 30 of their 54 points in the fourth period to stun the Libby Loggers, who had led throughout the game. The final score was 54-49 and the loss ended the Loggers’ season.

Libby had defeated Ronan twice during the regular season.

Ronan turned up the heat on defense during the fourth quarter and the Chiefs’ full-court press clearly rattled the typically poised Loggers. A combination of turnovers by Libby that yielded easy baskets for Ronan, along with misses by Libby players on the front end of one-and-ones and Ronan’s success at the foul line doomed the Loggers.

Josh Bean, coach of the Libby Loggers, said it’s tough to defeat a team when you allow them to score 30 points in the final quarter.

“I think we did a good job of controlling the game through three quarters and a little bit into the fourth quarter,” Bean said.

During the first half, Libby’s tight man-to-man defense challenged Ronan’s attempts to find and take good shots. Libby led 12-5 at the end of the first period and 21-12 at the half.

Ronan cut Libby’s lead to five points at one point during the third period but two baskets and a free throw by Chandler Bower and a bucket by Keith Johnson at the buzzer pushed Libby’s lead at the end of three periods to 37-24.

And then Ronan cranked it up a notch and cut Libby’s lead to six, then four, then two. The Chiefs tied the score with about two minutes remaining in the game. Key foul shots by Ronan’s Leonard Burke helped the Chiefs gain and keep the lead.

Senior Keith Johnson, in his final game for the Loggers, led team scoring with 18. Burke scored 18 for Ronan; he scored 15 of those points in the second half, including seven points from the free throw line.

The Loggers had a promising start and were 12 and 2 before losing their last five games, including two games dropped in overtime.

Bean said he was pleased by his team’s performance this year, noting the boys played well on defense and played together as a team.

Meanwhile, the Lady Loggers led the Whitefish Lady Bulldogs at halftime at Whitefish High School, 19-11. The Lady Bulldogs rallied and led 25-23 at the end of three periods.

And then Whitefish’s leading scorer for the night, Jadi Walburn, scored all of her 15 points in the fourth quarter. The Lady Bulldogs’ Gracie Smyley scored 13 during the game, tallying 11 in the first half but only two in the second half.

Whitefish won by a score of 38-29, ending the season for the Lady Loggers.

High scorers for Libby were Julia Martineau, with 10, and Syd Gier and McKenzie Proffitt, both with five.

Coach Jackie DeShazer said the Lady Loggers stayed close and had a chance to win.

“We were unable to convert good shots down the stretch and we made some very unfortunate turnovers but the girls left everything on the court and played a very impressive three quarters,” she said.

“We made someone other than Smyley beat us,” DeShazer said. “We also did an excellent job boxing out, especially in the first two quarters. It was our best job executing on defense and winning the battle of the boards.

“Syd Gier and McKenzie Proffitt both had excellent games and led the team by example with their hustle,” she said. “They should be very proud of their last game on the hardwood.

“As a coach I feel privileged to get to coach these young ladies and have watched these seniors mature since they were in seventh grade.”

The Lady Loggers finished the season with four wins and 15 losses. 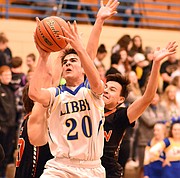 Libby’s Ryan Goodman goes up for a shot during a Feb. 24 home game against the Ronan Chiefs. (Duncan Adams/The Western News) 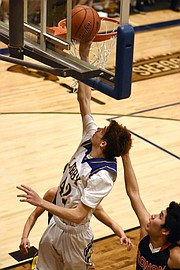