The Libby Lady Loggers faced a formidable Columbia Falls squad during a Feb. 7 home game and suffered a rout that reflected the Wildkats’ successful execution of a full court press, the team’s offensive skills and a full-bore demonstration of basketball fundamentals.

The Wildkats have but one loss this year, falling last month to the Browning Lady Indians. The team is considered a strong candidate for a state title.

The Columbia Falls girls harvested a bounty of turnovers with their press. Steals turned into easy baskets. The Wildkats moved the ball well and the team’s crisp passing yielded good shots from inside, mid-range and the perimeter.

Columbia Falls led 15-4 at the end of the first period. By halftime the Wildkats had extended their lead to 40-11. 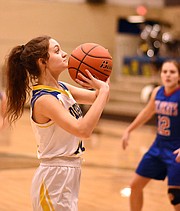