Caden Williams led Libby in scoring in a weekend matchup with Frenchtown, earning 17 for the Loggers. The Broncs pulled away in overtime to beat Libby at home, 57-55. (Duncan Adams/The Western News)

The Frenchtown Broncs hit key three-point baskets in regulation that helped push the hard-fought Feb. 8 game with the Libby Loggers into overtime, with the score tied 47-47 at the Ralph Tate Gymnasium.

The Broncs’ lightning-quick Cade Baker, who was dogged all night by the equally fleet-footed Jay Beagle of the Loggers, took control of Frenchtown’s offense during overtime. Baker scored from the field and the free-throw line.

With just 47 seconds left, the Broncs led 53-49. But Libby’s Chandler Bower sank a contorted shot he took in the midst of being fouled. He hit a foul shot too, cutting the lead to 53-52.

The Broncs’ Hank Rugg nailed a free throw, putting Frenchtown up by two. As the clock ticked down, Libby suffered two turnovers and missed a layup that helped yield a victory for Frenchtown.

Libby’s Caden Williams led the Loggers in scoring with 17. He was in foul trouble early and his time on the bench diminished the Loggers’ scoring and rebounding. Bower was the second leading scorer, with 11.

Baker and Devin Shelton each had 13 points for the Broncs. Zack Baker had 12.

The close game was a crowd pleaser, even if the outcome was disappointing for Loggers fans.

“I think it was a great basketball game, all around,” said Libby coach Josh Bean. “It was just a back-and-forth battle.

“In the first half we left a lot of points on the table because of missed free throws and layups,” he said, noting that the Loggers were 5 for 11 from the free throw line during the first two periods.

“That didn’t allow us to get any separation from them coming into the second half,” Bean said.

He described the Broncs’ Cade Baker as a talented player, one who requires constant guarding “with one-and-a-half players.”

Williams’ early foul trouble was a factor in the game, Bean said.

“That didn’t help at all. He was our leading scorer and he only played three quarters,” he said.

The Feb. 8 loss was only the third this year for the Libby Loggers, who previously lost to Polson and Corvallis. The Loggers’ current record is 12-3.

Their counterparts on the Lady Loggers also lost, 42-25, to the Lady Broncs.

Coach Jackie DeShazer said she felt her team played a solid second quarter, playing well defensively and boxing out underneath. She said the Lady Loggers played better against the full-court press, a defense that has rattled the girls in games past.

DeShazer said there were times during the second half when the ball just didn’t fall on offense.

“It’s not a lack of effort on the girls’ part,” she said, noting that some members of the team are still adjusting to varsity play and to playing before large crowds.

The girls and boys basketball teams play their final home games of the season on Feb. 21, when the squads will host Whitefish High School on senior night. 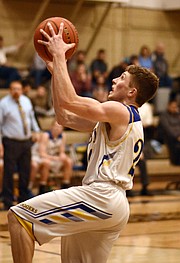 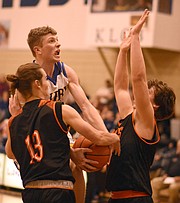