It was Browning’s first conference loss.

A large crowd, with some choosing the Loggers’ warm gym over a home rendered chilly and dark by a regional power outage, watched the Loggers prevail 60-49.

Johnson, a 6-foot, 4-inch senior, scored seven field goals and added 11 points from the foul line. The Loggers scored a total of 26 points with free throws. That tally partially reflected intentional fouling by Browning late in the game.

Browning scored 10 from the foul line.

Both Ryan Goodman and Caden Williams scored 10 points for the Loggers.

Loggers Head Coach Josh Bean anticipated a tough game against Browning, a team he described as blessed by gifted athletes. He credited his team with playing well.

“Our boys were ready to go tonight, mentally and physically,” Bean said.

“We rebounded the ball really well out of man-to-man tonight, all night long,” he said.

Bean said the Loggers did a great job early on of breaking a full-court Browning press, leading to a few easy baskets.

Browning continued to occasionally use a half-court or full-court press even though Libby coughed up few turnovers.

The Indians led 17-15 at the end of the first period, during which SpoonHunter and Chris Reevis had both hit threes.

A technical foul called during the third period helped Libby take the lead, going to 35-32.

Libby continued to pull down rebounds on both ends of the floor.

Browning seemed to hurry their shots in the waning minutes of the third period and Libby’s control of the boards helped them pull ahead. At the end of the third the score was Libby 48, Browning 38.

Browning closed the gap to six points with four minutes left in the game but hurried shots, followed by intentional fouling as the clock ticked down, helped Libby notch the win.

“It was a great effort,” Bean said.

He said Goodman did an outstanding job defending SpoonHunter, whom Bean described as Browning’s “number one guy.”

Meanwhile, the Lady Loggers scored early against the Lady Indians as McKenzie Proffitt and Syd Gier put points on the board.

Still, at the end of the first period, the Lady Indians led 11-8. The Lady Loggers struggled with turnovers and cold shooting during the second period. The half ended with the Lady Indians up 22-12.

Browning’s Dulci Skunkcap, a 5-foot, 10-inch senior, was a dominating presence. Her height and bulk made her a force beneath the basket at both ends. She led the Lady Indians’ scoring, with 21.

The Lady Indians extended their lead during the fourth and won the game, 52-24.

The Loggers boys and girls basketball teams are scheduled to travel to Browning on Feb. 18 for a rematch. 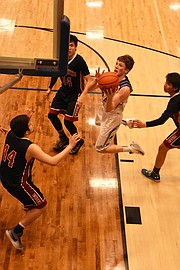 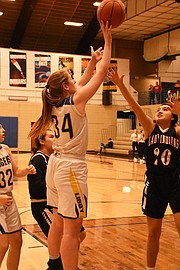